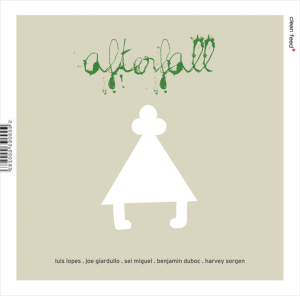 “By We are waking up slowly, somewhere unexpected. Small sounds are creeping into our consciousness, clicks, moans — slightly spooky — suggesting a less than desirable near future. We begin to focus and clicks become tones, sounds begin to connect, we realize that we are being spoken to, but in a strange dialect. Soon we realize that this language, that while somewhat familiar, is actually comprised of those clicks and sudden accents — a wail or moan is not unintended. It’s all a part of the drama unfolding around us. The pacing quickens and the harmonies thicken.

Afterfall is an international collaboration on Clean Feed records with Luís Lopes on electric guitar, Sei Miguel on pocket trumpet, Joe Giardullo on soprano and tenor saxophones, Benjamin Duboc on double bass and Harvey Sorgen on drums. Lopes, from Portugal, is the group leader, but you may not know it, as he takes a back seat to his other Portuguese, American and French colleagues. In fact, it’s Giardullo whose voice seems to be most prominent.

At first, there is a feeling restraint, like the musicians have colluded in not revealing exactly what they mean. However, things begin to loosen up slowly towards the middle of the album. ‘Cancoa Branco’ builds slowly over eight and a half minutes and only in the last minute of the tune does Lopes’ distorted guitar rise out of the mix along with Giardullo’s sax. But then the communication barrier has been broken open and the music pours forth on ‘American Open Road with a Frog.’ Then it starts making sense, this album is a suite, each piece building up into longer sonic segments and becoming increasingly melodic. Giardullo takes a full throttled free blowing solo, finally saying everything that was being held back for so long. ‘Open Road’ has broken free and how good it feels — it’s almost swinging!

The last two songs find us retreating back into a murkier atmosphere. ‘Triptych’ begins with upright bass bowing a dark chord and plucking choice notes white Lopes’ guitar sprinkles tiny melodies atop. It laboriously builds, adding trumpet, then percussion and finally sax, leading to a fierce collective improv. The last tune, ‘Return of the Shut Up Goddess’ brings us full circle (the first tune is called ‘The Shut Up Goddess’), with small snippets of melody and scratching rhythms. However, this time we are fully awake and ready.

This arching song cycle is illuminating. Lopes’ use of the guitar as a colorist and percussionist (at times) is as non-conventional as you can get. All the sounds and dynamics of the sax and trumpet are explored. The album has some darker undertones, but they function by making us work harder to understand, and I’m fairly certain that we are, by this point, starting to get it”  Paul Acquaro / Free Jazz review

“We recently encountered guitarist Luis Lopes as part of the Humanization 4tet (see January 13th posting). He returns today as a member of the equally adventurous Afterfall (Clean Feed 208). It’s a free-avant encounter with a quintet that includes Lopes, Joe Giardullo on soprano and tenor, Sei Miguel on pocket trumpet, and a rhythm section of Benjamin Duboc on upright bass and Harvey Sorgen on the drums.

This is five-way interaction, a cooperative date all the way, with all five members sharing the composing credits. What that translates into for the listener is seven musical vignettes, each somewhat different in mood. The freetime feel is pretty constant, with time sometimes more overtly implied and sometimes in a free falling zone. Some numbers are sparser and more reflective, some more extroverted and energetic. Sei Miguel’s always muted pocket trumpet forms a good contrast with Giardullo’s shining soprano or gruff tenor and Lopes’ sound-color oriented guitar.

A high point is Giardullo’s tenor work in “American Open Road with a Frog,” where he is is rippingly muscular over churning drums and bass. “American Tryptich” finds some room for Lopes’ spicy, floating chord voicings and chopping staccato-line crafting, some after-Miles-and-Cherry tartly stating-the-fact trumpet inventions and grainy bowed bass. “Return of the Shut Up Goddess” brings a storm of bowing thunder and weighted brushwork underpinning more Miguel muted eloquence and then vibrato-laced sustained guitar lines of a rough beauty. There are plenty of such moments, each one with a slightly different mix of musical voices, shades and degrees of emphasis.

This is a sleeper. It is so subtle in many ways one has to listen a number of times before the logic of the improvisational language truly speaks to you. But I found that it did after a time. And what it said was most definitely worth hearing”   Grego Applegate Eduwards / Gapplegate Music review

“Afterfall is an international quintet consisting of Portuguese (guitarist Luis Lopes and trumpeter Sei Miguel), American (tenor and soprano saxophonist Joe Giardullo and drummer Harvey Sorgen) and French (bassist Benjamin Duboc) musicians. Their first meeting in a Lisbon studio is documented here. The methodology is free improvisation, but as the instrumentation suggests, there are strong free jazz elements at work here in both the roles and the textures the band favors, from the Cool-era sound of Miguel’s pocket trumpet – always muted and played in the middle-register – to the vocalic wails of Giardullo’s saxophones. The band is both genuinely collective and spacious, with a shared willingness to let ideas develop in their own time. There’s a certain transparency in the band’s music, with one musician’s voice passing through another’s. Most interesting are microscopic, granular bits of sound that abound here, sometimes ultimately traceable to Sorgen’s subtle cymbal and snare work, but more often to Lopes’ thoroughly electronic conception of the guitar. His gritty waves of barely audible sound contribute much to shape the textures prevalent here and when he takes the lead he has a sense of sonic play that extends from the glassy quarter-tones of the opening “Shut Up Goddess” to the sustained feedback on “Return of the Shut Up Goddess”, his guitar almost shakuhachi-like. While Sorgen and Duboc can provide fields of scintillating detail, they’re also capable of tremendous drive, most notably in the powerful backing they provide Giardullo for his intense tenor exhortation on“American Open Road with a Frog”, a whimsical title likely inspired by the soulful multiphonic roar that the saxophonist develops. The extended “Triptych” is notable for the collective composition of which the group is capable, Duboc (a brilliant arco player) and Lopes developing spontaneous figures that become both insistent support and provocation to the horns. There are musical relationships developing here that bode well for the future”  Stuart Broomer / The New York City Jazz Record

“Ad hoc group names cause paperwork headaches trying to keep track of jazz releases, and this label is particularly fond of concocting such names. I filed this under guitarist Luis Lopes, figuring he was the first named and held home court recording in Lisbon. Moreover, he’s on a run, his guitar the steely backbone of at least four fine records in a row, most with horns which add to but scarcely eclipse him. Jazzloft, on the other hand, filed this under soprano saxophonist Joe Giardullo, older and no doubt better known in America but not exactly a household name. Giardullo mostly plays tenor here, not all that distinctive, but the extra heft and depth sounds good, especially mixed with Sei Miguel’s muted pocket trumpet. Also working here are Benjamin Duboc on bass and Harvey Sorgen on drums. A little more inside than Lopes’s Humanization 4tet records, which makes this a tad less impressive, but that seems to be Lopes’s knack: to make good records without showing off much flash” B+(***)  Tom Hull