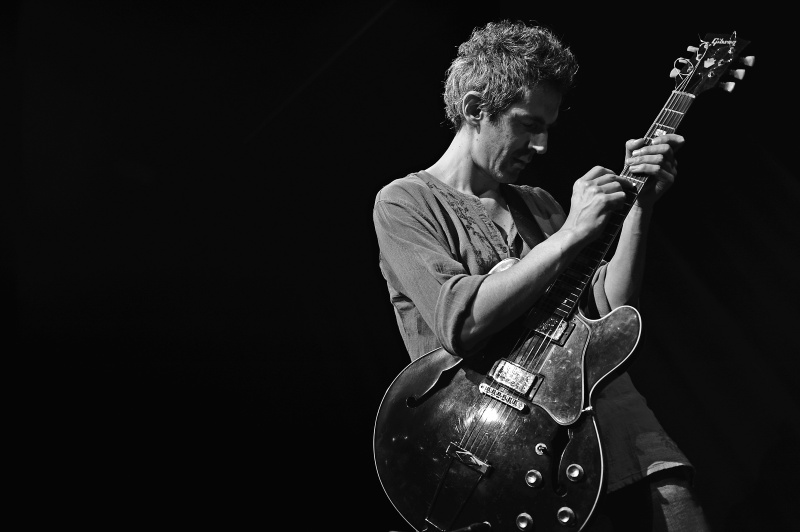 Averse to any linearity, the Idiosyncratic Luís Lopes, a musician connected to Jazz, improvised and experimental music, has been building his career, a simple and singular story, characterised by a unique voice, free of corsets, formal ties  or constraints and mannerisms regarding strict stilistical implications. He is an unfollower… experiments himself through paradoxes. Invokes teachings by following standards of subversion to any possibility of pre-established idea. Eminent self-subversion… Introspective timeless trance.

He leads several groups that soon positioned him in the international scene: Humanization 4tet (with Portuguese sax player Rodrigo Amado and Texans Stefan and Aaron Gonzalez), Lisbon Berlin Trio (with Germans Christian Lillinger and Robert Landfermann), Guillotine (with french cellist Valentin Ceccaldi and drummer Andreas Wildhagen from Norway). He integrates collectives such as the Lisbon 9 elements ensemble LFU – Lisbon Freedom Unit, The Trio Garden (with Bruno Parrinha and Ricardo Jacinto), and also BBBB-Big Bold Back Bone a swiss-portugese electro-acoustic quartet. Then, he has his solo works, characterized by a full experimental attitude and can range from Noise to Pianissimo. Plus, he cherishes and privileges duo projects, examples are collaborations with Jean-Luc Guionnet, Fred Lonberg-holm, Noel Akchoté and Julien Desprez

Coming from a rock/punk and blues background, while studying at local classic and rock schools, he began studying Jazz at Hot Club Portugal School and then was finalist at Escola de Jazz do Barreiro/Lisbon. Then did studies with Saxophonist Joe Giardullo who opened for him the doors of modern jazz harmony complexity through the George Russell’s “Lydian Chromatic Concept of Tonal Organization”, plunging Lopes into the world of improvised and experimental music, without disregard for his fascination with distorion and guitar feedbacks, expressed in different incursions into noise music, while also canalizes energys towards projects where he can develop his composing abilities.

“He tends to play on the outside and alternates between a dryly electric and a high impact straight tone. Beefheartian guitarists, Sharrock in his early period and Ulmer in his outer moments are touch points in describing his style, but only as rough approximation, for he has a distinct bag”  Grego Applegate Eduards / Cadence Magazine

“He slurs, he scurries, he stops in unexpected places to flail at a single note, and he plays waaaaaay behind the beat to create a most interesting kind of energy. Good stuff!”  Jason Bivins / Cadence Magazine

“he remains very much his own man, and I love his idiosyncrasies, especially his weird habit of doing little rubbery spasms, like his guitar is spring loaded”  Jason Bivins / Signal to Noise

“The Portuguese guitarist Luis Lopes has tricks up his sleeve […] he is an adept player of noise and feedback (as opposed to simply a maker, Lopes is the rare guitarist who can use it quite tastefully)”  Kurt Gottschalk / All About Jazz New York

“Lopes is a stylist and uses closed-hand tapping techniques while putting matters into overdrive via his cross boundary exercises. He merges free, jazz-rock with dynamic, hard-core experimentalism”  Glenn Astarita / Jazzreview

“Lopes is about as far as one can get from a pyrotechnical guitarist, hanging back with muted, gritty lines and fields of delicate introspection”  Clifford Allen / All About Jazz NY

“He’s a rather abstemious soloist after all, paying special attention to the correct placement of notes, not exactly longing for the sanitization of his sullied tone, which is a good thing in terms of originality”  Massimo Ricci

“Luís Lopes is a Portuguese guitarist whose work is grounded in rock, funk and free jazz, but it’s often his electronic conception of the instrument that comes to the fore, a knack for unlikely accompaniments that can include quiet noise and singing quarter-tones and solos that are marked by thoughtful construction and a reflective depth that can suggest the plaintive wail of a shakuhachi […] It’s a century-long tradition of sonic experimentation that Lopes invokes, distinguishing himself from the majority of feedback guitarists by the constructivist patience of his work, his fondness for the infinitesimal microtonal shift in a wailing sustained tone, for the development of rhythmic patterns as one sound is played against another, and for the sense of sustained design. It’s fundamentally meditative noise that Lopes practices, exploring perhaps feed-forward as well as feedback in the ecstatic creation of a timeless trance”  Stuart Broomer / Point of Departure

“Luis Lopes is a guitarist from Portugal, living in Lisbon, playing in his own idiom, with his own technique, approach, all in once […] His guitar playing is very subtile, ranging on a large scale of dynamics, some upfront playing, some side ways, sometime bellow and the next moment on top”  Noel Akchoté

“With Live In Madison and Noise Solo, Luis Lopes has demonstrated two aspects of his arsenal that I’ve always enjoyed. The sense of creative musical thought and excellent collaboration. Two exciting new records well worth your investment. Get out there and pick them up.”  Stephan Moore / JazzWrap