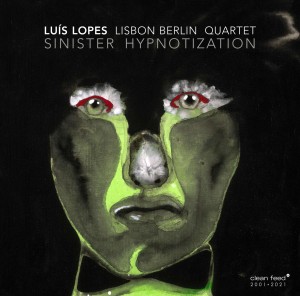 Luis Lopes’ Lisbon Berlin Quartet immediately references the residences of the contributing musicians, Lopes and Rodrigo Pinheiro from Lisbon, Robert Landfermann and Christian Lillinger from Berlin, but there’s more than this that feeds the specific urban relations of this music. To say each is a city with a past, is understatement. If Berlin will loom larger in general histories, from the nightmare of Nazism and the following decades of division, the wall and the refined horrors of the Stasi, Lisbon has a special claim on duplicity, given the half-century reign of the Salazar dictatorship, a fascist regime that preferred relationships with major Western ‘democracies’_ England, America_ which in turn found secret police, torture and oppression easily overlooked for an ally in the war against communism. It was a duplicity that once made Lisbon an espionage hub, a network of spies, lies and conspiracies as much as a city. Lopes’ Lisbon Berlin references all of that indirectly, but it’s a contemporary vision—forcefields and fault lines, underground and skyline, alive from road to rail to phone to rail to phone to cloud, all that data congealing in space, messages breaking up into compound futurities.
The band exercises a brilliant fury, parts mirror one another, sounds may be distinct_ there’s definitely something special about Landfermann’s upright bass, often bowed but through pedals and amp creating a hybrid monster of acoustic and electronic genes_but it’s the wild reflective possibilities of all those high-volume sounds, bouncing off studio walls at a pace in which sonic after-images present undreamed of future cities, third-world Metropolises with contemporary social problems wed to future mutations. Pinheiro, elsewhere master of a certain contemporary classicism, here pursues his own electronic bent, a happy partner and prod to Lopes’ amplified kinetics, while Lillinger, here and elsewhere, exercises a combination of chance and precision that could make him the defining drummer of a generation.